Police force doubles down on dogs

WESTMINSTER PD Officer Steve Booth with his new K-9 partner, Ranger, and their WPD patrol SUV custom designed to transport Ranger to where he is needed. (Photo by Steven Georges/Behind the Badge)

Even before he became a police officer, Steve Booth knew one thing: He wanted to become a K9 handler.

That was more than 15 years ago. But his dream finally came true on Nov. 1 when he began patrol in Westminster with his new partner, a 90-pound, 2-year-old, black-and-tan German shepherd named Ranger, who is now the Westminster Police Department’s second K9, joining Pako.

“This has been such a long journey for me,” said Booth, who’s been with the WPD for nearly 15 years. “I’ve been through quite a bit to get this spot.”

When he was fresh out of the police academy, Booth was eager to become a K9 officer — but he knew the WPD didn’t have a K9 program and there were no signs of that changing. He didn’t let that dampen his enthusiasm.

That meant fully immersing himself as a police K9 decoy, also known as an agitator, wearing a suit and taking bites from dogs working at other agencies — not only locally, but across the country.

“I would do that every week,” he said.

And he also didn’t give up on the idea that the WPD would one day reinstate the K9 program, which was put on hiatus years earlier. He wrote in-depth proposals for various chiefs requesting to bring back the program to the agency. They were denied at the time.

He started to wonder if he should pick a different career track. With no sign of any K9 program on the way, he decided to put in for detectives. 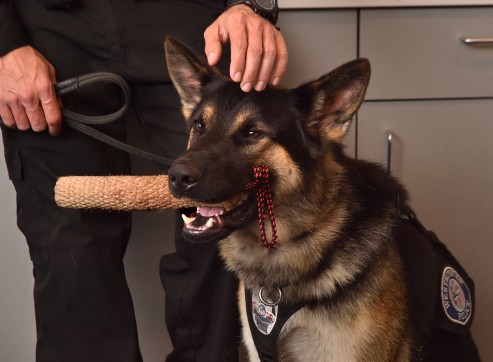 About a year into his detectives’ stint, something happened. The deputy chief at the time asked him to resubmit his latest K9 program proposal. Then he learned the proposal would be used as the framework to reinstate the program. Incredibly excited, Booth resigned from detectives, knowing that it is department policy that there must be a six-month break between special assignments. He wanted to be ready for the opportunity to apply for the K9 officer spot if and when it opened.

When it finally did, he was only four months into the required six-month break between special assignments and was not eligible to put in for the new K9 program assignment.

That was four years ago. But again, Booth didn’t let this setback stop him. He continued his decoy work and learned wherever and whenever he could — including by attending K9 and SWAT schools across the country, on his vacation time and dime.

“I’ve probably agitated for over 50 police departments from all over the country,” he said. “I literally did everything that I possibly could. … I’ve been to like three agitator schools, liability schools.”

And that wasn’t all he did. Since he already has two dogs at home — a German shepherd and a Chihuahua mix — he decided to separate his backyard into two yards in the event that his future K9 didn’t get along with them. He also took his RV parking area at his home, gutted it, put turf down and spent several thousand dollars building a kennel with security cameras and all for the dog he did not yet have.

“I knew I would eventually get it,” he said. “It was just a matter of waiting my turn.”

Then it happened. Former Westminster city councilwoman Diana Carey donated funds for the city to purchase a police K9. Other donors also contributed, which helped fund a second K9 patrol vehicle, as well as other necessary equipment. A K9 position was approved and opened. Booth applied and, finally, became a police K9 officer.

“I literally cried when I got picked,” said Booth. “She changed my life for sure.”

But the twists and turns of Booth becoming a K9 handler weren’t quite over. The agency still needed a dog. In September, a group from the WPD and city council headed to police K9 importing and training facility Adlerhorst International in Riverside to select a dog.

Once a dog is selected, the handler and trainer stay for a six-week K9 school that handlers and dogs must pass to become officially certified as K9 officers. It took some trial-and-error, but Booth eventually found a match in Ranger.

Imported from Holland, the rambunctious Ranger is “extremely high drive,” according to Booth. “He’s got a really good nose.”

And a loud bark.

So loud, in fact, that in his first week on the job Ranger scored five surrenders in one night. The first call involved two suspects who broke into a home. The patrol officer at the scene called for backup. Ranger arrived and let his bark loose — resulting in two apprehensions. The second call involved three suspected gang members who ran from a WPD officer and barricaded themselves in a building. When Ranger arrived, the suspects agreed to surrender but wanted to make sure the K9 was leashed when they came out.

Even as Booth and Ranger are busy catching bad guys, training is ongoing. They have a weekly training session with Santa Ana Police Department’s K9 team as well as a monthly one back at Adlerhorst.

“As much work as I thought it was gonna be, it was probably double,” said Booth. “It’s non-stop training.”

Ranger has a strong personality of his own. Another handler comically described him to Booth as a 16-year-old who just got his driver’s license.

Meanwhile, Ranger — waiting patiently as his partner talked about him for an interview — decided enough was enough and started barking at Booth for his jute toy.

“He’s a firecracker for sure,” said Booth.

For more on law enforcement personalities and issues, go to http://www.behindthebadge.com .