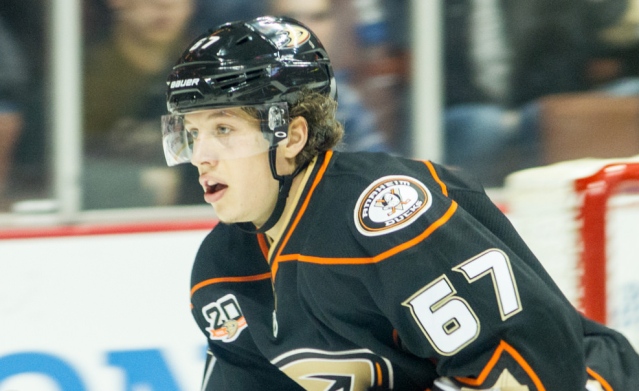 RICKARD RAKELL scored two goals for the Anaheim Ducks in their 4-1 win over the Tampa Bay Lightning on Saturday (Flickr/Bridget Samuels).

Also scoring goals for the Orange County team were Brandon Montour and Hampus Lindholm. John Gibson had 31 saves in goal. Ryan Getzlaf had three assists in the game.

The win improved the Ducks’ record to 5-4-1, worth 11 points and fourth place in the NHL Pacific Division. Anaheim is in action again on Sunday, visiting the Carolina Hurricanes (4-4-1).

The Edison-Fountain Valley football game wasn’t the only “Battle for the Bell” played this weekend in Orange County. The Golden West College football team defeated rival Orange Coast College 56-13 at home on Saturday.

Joe Pyle passed for 458 yards and five touchdowns in the win, which squared the Rustlers overall record at 4-4 and put their conference mark at 2-1. The game was fairly close –29-13 in favor of GWC – until the green-and-gold scored four fourth-quarter touchdowns.

Golden West will be next in action on Saturday, Nov. 4 at Grossmont.

With a 46-38 win over Cal Lutheran on Saturday night, the Chapman University football team clinched no worse than a tie for the SCIAC title. The win also means the Panthers have a berth in the NCAA Division III playoffs.

Ricky Bautista threw for 309 yards and six touchdowns in the win, which put the overall Chapman record at 5-2, 5-0 in conference play. Joe Mudie rushed for 153 yards, catching one scoring pass and running for a touchdown.

Next, the Panthers will host Claremont-Mudd-Scripps on Saturday, Nov. 4.