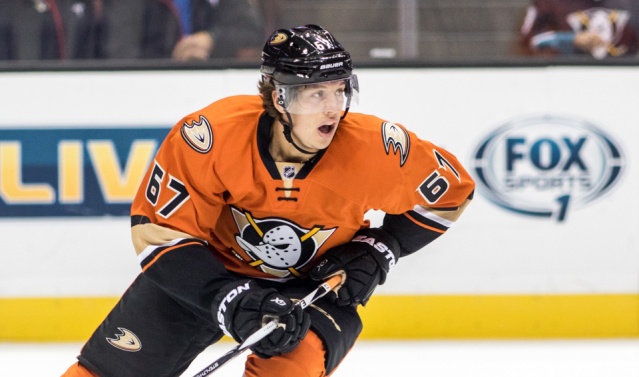 RICKARD RAKELL scored one of the three first period goals by the Anaheim Ducks Thursday en route to a 3-0 win over the Minnesota Wild, snapping a 12-game losing streak (Bridget Samuels photo).

All bad things must come to an end. The Anaheim Ducks snapped a 12-game losing streak – the longest in team history – with a 3-0 victory over the Minnesota Wild in St. Paul on Thursday.

The Ducks got off to a hot start, getting three goals in the first period.  Adam Henrique, Rickard Rakell and Brian Gibbons tallied for the Orange County team.

“We just all came together,” said Gibson, who earned his second shutout of the season and the 18th of his career. “Any time you lose that many games in a row, it’s a test to anyone’s character and the will to win. We finally came together and said ‘Enough is enough.'”

The victory improved the team record to 20-19-9, worth 49 points and a tie for fourth place in the NHL Pacific Division with the Edmonton Oilers.

That win came after the Ducks made four trades, changing the lineup and perhaps the dynamic of the team.

Hoping to start a new streak in a different direction, the Ducks will take on the New Jersey Devils (18-22-7) on Saturday.