A “Holiday” tradition winds up in style 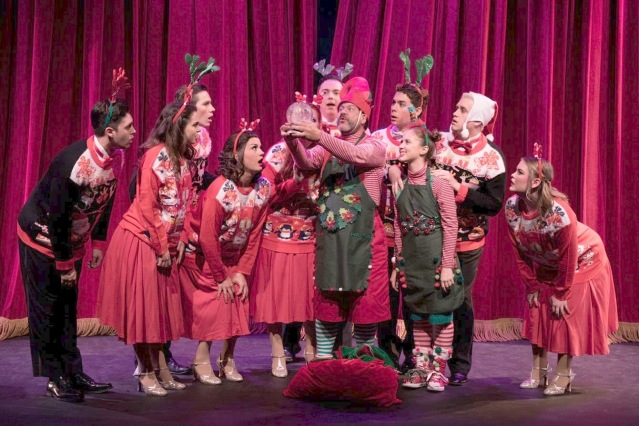 “THE HOLIDAY GEM” is on stage at the Gem Theater on Main Street in Garden Grove (OMP photos by Lisa Scarsi).

To everything, as they say, there is a season: and though seasons change, endings help us remember and celebrate the experiences we’ve had, the memories we’ve shared.

Such is the case with this final season of the annual “The Holiday Gem” at the Gem Theater — after seven years as a staple of the Gem’s One More Productions troupe, the popular show is going out on a high note: if not gone, then at least on an extended (and well-earned) hiatus.

On the cusp of Christmas Eve, North Pole elves Ernie (Johnnie Gillies) and Emma (Megan Michell) have found themselves in Garden Grove, California – and ironically enough, at the Gem Theater, where the cast is rehearsing for its Christmas show. But all is not well with the actors: with plenty of backbiting, grandstanding, and generally poor holiday temperament amongst the lot of them.

Looking to brighten the atmosphere (while filling their canisters with the Christmas cheer that a certain Mister Claus uses to power his sleigh) the elves produce the “Magical Snowglobe of Christmas Fantasyland” – a snow-filled enchanted glass orb that will transport the user to one of a number of holiday-themed lands. When the curmudgeonly crew lay hands on it and recite “I believe in the magic of Christmas!” their adventures begin as they are whisked away …

But all is not as idyllic as it would seem: the menacing gloom of the jaded South Pole elves Evelyn (Danny Diaz) and Minion (Shayna Gayer) threaten to derail the festivities with their nefarious plans to cancel Christmas by kidnapping Santa Claus (Damien Lorton) – and trapping the Gem cast in a land where they can’t disrupt the pair of dark elves’ shenanagans.

Will the world see another Christmas? Will the gang discover that human connection to the holiday and to each other that gives the season its warmth and meaning? Will the vivacious and scene-stealing Mrs. Claus (Adriana Sanchez) ever downplay her showboating? (Spoiler: don’t count on it.)

“The Holiday Gem” has become a tradition for some of the local theatergoers and their families, and is definitely one to be shared with loved ones in this final season. Familiar and beloved faces from a number of other Gem Theater productions can be seen, belting out numerous popular holiday standards (and a few originals as well.) Comedy abounds in the interplay between the cast (as usual, Nicole Cassesso steals the spotlight with her antics during “Dear Mr. Santa,” and her duet with Sanchez’ Mrs. Claus in the hyper version of “Jingle Bells” is always a highlight); and Diaz’s Evelyn and Gayer’s Minion have some fantastic and witty exchanges and chemistry – even a little pathos, as the audience finds some sympathy for his character

It’s one for the whole family, and something to be experienced before it’s gone: and if you’re not going for the comedy, the music, the audience sing-a-long or Mrs. Claus’ high notes, then go for the tap-dancing Santas. (Just trust me on this.)

“The Holiday Gem.” Adriana Sanchez, Danny Diaz and a cast of One More Productions favorites star in this celebration of the season, bringing the warmth and holiday magic to Garden Grove, for one final run. Playing through Dec. 16 at the Gem Theater, 12852 Main St., Garden Grove, CA, 92840. Call 714-741-9550 x221 or e-mail boxoffice@onemoreproductions.com for ticketing information. Appropriate for all ages.