“West Side Story” explored at the Gem 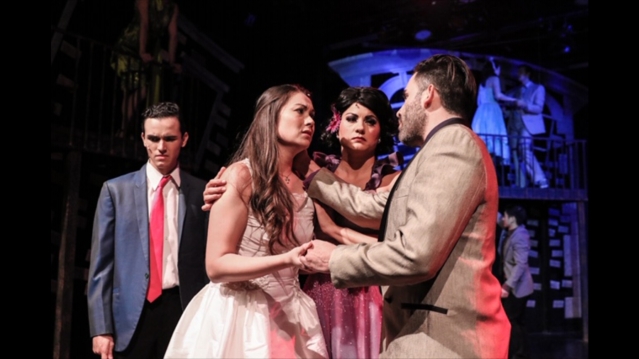 LOVE AND ANGER clash in “West Side Story” now on stage at the Gem Theater in Garden Grove (OMP photos by Ron Lyons).

It’s a rallying cry of anger: inevitably, when cultures clash, those established fear the encroaching of the new, the foreign, the alien. But can there not be found a bridge between the two, something common in the human condition to unite these two warring households?

“West Side Story”, directed by Damien Lorton, has just opened at the Gem Theater in Garden Grove, with the One More Productions company taking on the classic musical re-envisioning of Shakespeare’s “Romeo and Juliet.” The factions butting heads are families of a sort: rival gangs vying for territory, led by Riff (Race Chambers) heading the Jets crew, and Bernardo (Danny Diaz) leading their recent adversaries, the Sharks. But while the Jets have been established for some time, the Sharks themselves are trying to find their own place in this new country they’ve emigrated to.

However there’s not just hotheaded young blood in both factions, but a few more even-tempered, as well: Riff’s best friend Tony (Brandon Taylor Jones), is a former member of the gang who’s grown out of his rebellious phase and tried his hand at “adulting,” and yet gets drawn back into the conflict out of loyalty to his friend; while on the Sharks side, there’s the effervescent Maria (Erika Baldwin), sister to the leader of the Sharks, as well as Bernardo’s own sassy girlfriend Anita (Nicole Cassesso) — both are still enraptured with this new country, so full of opportunity, and looking forward to their new lives and futures yet unwritten.

When the antagonistic groups meet up at a local dance (to establish when and where their big deciding clash will occur), it’s there that Tony and Maria finally meet: instantly smitten with each other, neither of the star-crossed lovers care about the rivalries of their chosen families — only the tender emotions, passion, even love, that’s blossoming between them.

But when blood is shed, it cannot be undone… And not even love can always conquer all.

While some may assume “West Side Story” to be just to be a Romeo and Juliet analogue, there’s many more complex themes than just romance. The xenophobia against immigrants, institutional racism, territoriality and the passing-the-buck regarding the root causes of teenage rebellion and revolt. 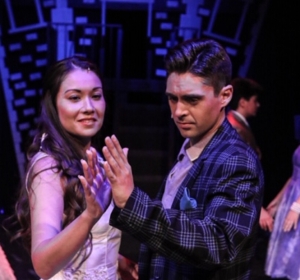 ERIKA BALDWIN and Brandon Taylor Jones as Maria and Tony in “West Side Story.”

Both Tony and Maria are trapped by their circumstances: penned in by forces beyond their control, while desiring to rise above, taking no part in the conflict between the groups, they still find themselves unable to resist the bonds of friendship and family — constrained by love and loyalty, on an inevitable collision course with tragedy.

The struggle between both sides, upon first glance, may seem juvenile: but when seen through the lens of the next generation, struggling to establish their autonomy and their place in a rapidly changing and increasingly complicated world, it takes on a more nuanced hue. But still, neither side is without blame or responsibility.

The local cops themselves are part of the mechanism of repression: not wanting any disruptions or headaches on their watch, Lt. Schrank (Jon Michell) and Officer Krupke (John Gillies) have no problem threatening both sets of youths (albeit with more racially-tinged overtones to the foreign-born participants) – even reminding the Jets members to know their own place (later leading to the comical and confrontational social commentary of the musical number “Gee, Officer Krupke”)… They’re not there to actually keep the peace, only to enforce the status quo, and to keep the rebellious teens in check.

In terms of the dance performances in this production, the cast (and choreographers Heather Holt-Smith, Shauna Bradford and Alan Collins) have outdone themselves: with the number of performers in a limited space, moving together seamlessly, with such precision, such energy, such expressiveness, as to be a wonder. Numbers such as “America”, “Cool” and the prologue — the encounter between the gangs at the beginning of the story, where there is near-to-no dialogue, only the actors emoting through dance — are a marvel to behold.

As par the course with the Gem, it’s difficult to single out one performance above all others, with the caliber of acting and singing performances in this show: but stand-outs include Jones’ gentle, love-struck and conflicted Tony, Cassesso’s fiery and independent Anita, Chambers’ charismatic Riff and Diaz’s determined and protective Bernardo.

But Erika Baldwin is a revelation.

Those who frequent the Gem will recognize her from numerous other productions, including “Cabaret”, “The Music Man”, and the recent “Nine”: but here, she becomes completely immersed in the role of Maria. The audience shares – even experiences – both her elation and anguish over the course of the story, palpably. It’s not just her stellar vocal skills, her adroit dance performances … but how she so utterly inhabits the role. The joys and pains of her Maria ring irrefutably true, as she vanishes within the character … and brings an unquestionable authenticity to her performance.

“West Side Story” at the Gem is not just entertaining, but intense, and moving: reminding us that the story is not just one of the most classic and beloved musicals of the 20th century, but a social commentary about fear of the “other,” the cost of anger and violence, the value of personal responsibility, how love can inspire and help us toward our best self … but in that the end, it’s up to we, ourselves, to rise above.