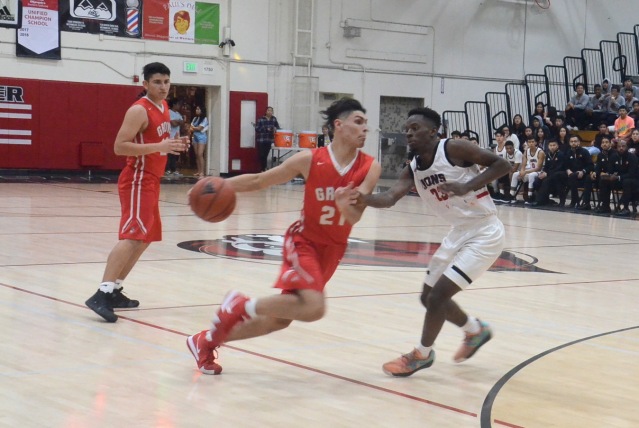 GARDEN GROVE built a big lead, then had to hang on to defeat Westminster 66-60 on Friday in the Golden West League opener for both teams (Orange County Tribune photo).

It was a night of upsets and near-upsets last Friday when a lot of area high school basketball teams opened league play or otherwise began the 2019 part of the 2018-19 season.

The Marina High boys’ team snapped a 20-game losing streak to cross-town rival Edison, beating the Chargers (top-ranked in our High 5 of teams in the Garden Grove-Huntington Beach-Stanton-Westminster area) 56-55 on a last-second shot by freshman Eric Hodgkins.

Pacifica High School’s boys’ team built an 18-point lead Friday against Crean Lutheran, but couldn’t hang on and lost 67-61 to the Saints in the Empire League opener for both teams.

Garden Grove High’s boys’ hoops team had a 10-point lead at halftime over Westminster Friday and extended it to 15 at one point. But the Lions rallied and closed to within two points late in the fourth quarter before falling 66-60 in the Golden West League opener for both teams.

Our High Five for this week – despite the upsets and such – is the same as last week, with Edison still on top, followed by Garden Grove, Pacifica, Marina and Ocean View. The only change is that Orangewood Academy replaces Santiago as the “on the bubble” team.

On the girls’ side, the biggest game this week looks to be Santiago (14-3) at La Quinta (12-5) on Wednesday in a battle for the Garden Grove League lead. The Cavaliers are hot now, having won seven straight. Both teams are 2-0 in early going.

Our High 5 for girls’ hoops also looks pretty familiar, compared to last week. Huntington Beach, Orangewood and Santiago are the top three, with Marina again in fourth. But Westminster has bumped Garden Grove out of fifth and the bubble team is again Western.

Football is gone, but not forgotten. Here’s a listing of the league honors handed out recently to local teams and players.

Co-Offensive Back of the Year:Kobe Lopez (Edison).

Kicker of the Year:Kieren Spradlin (Edison).

The CIF-SS is back after the holiday break with its rankings for winter sports. Here is how local teams were recognized.

Prep Sport Spotlight appears (on most) Tuesdays during the high school athletic year.