SHOHEI OHTANI hit a two-run home run in the Angels’ 5-4 win over the Twins on Monday. It was his first home run of the 2019 season (Angels photo).

When Shohei Ohtani came to the Los Angeles Angels, much of the buzz was over the two-way skills of the Japanese star. However, his contributions have been more with the bat than the pitching arm.

That was underlined Monday when he hit a towering two-run home run for the Angels in the third inning of the Halos’ 5-4 victory over the Minnesota Twins in Minneapolis. He started the season slow, but has found his stroke. 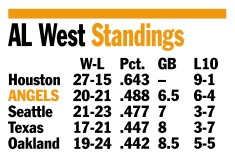 “I was seeing the ball really well the whole time, but my timing was just a little off, and the way I was making contact, the angle was a little off,” Ohtani said through an interpreter  “But I’ve been hitting the ball in the air recently, and I think it showed today that I’m improving.”

Also contributing some power was Tommy La Stella, who homered in the sixth. The Angels had 15 hits on the evening, led by La Stella, Mike Trout and Albert Pujols, who each had three.

With the score tied at 4-all, the Angels scored what proved to be the winning run in the top of the sixth on La Stella’s homer, his 10th of the season.

Tyler Skaggs (4-3) got the win, working five innings while giving up five hits and four runs. He struck out five and walked three. The bullpen held the line after that, as three pitchers gave up just two hits.

The victory improved the Angels’ record to 20-21 and preserved their position at second place in the American League West.  On Tuesday the teams will meet again with Cam Bedrosian (1-1) opening against Kyle Gibson (3-1).