KRYSTAL CALDWELL (12) shoots a free throw for Orangewood during the Spartans 58-47 win over North High of Torrance in a CIF-SS Division 2AA Saturday night (OC Tribune photos by Christopher Abdelmalek).

In front of a packed house at Orangewood Academy in Garden Grove, the host Spartans defeated North High of Torrance 58-47 in a semi-final matchup of the CIF-SS 2AA girls’ basketball playoffs on Saturday night.

They will face San Joaquin League rival Fairmont Prep in the finals on Feb. 29. Orangewood (25-6) was led by Aixchel Hernandez with 14 points, 10 of coming in the first half and helping to give her team a 24-23 at the half

The visiting Saxons were led by Dara Tokeshi, who dropped in a game-high 19 points in the loss. She put up eight points in the second quarter to cut the lead down to one point and keep her team close in the game. Each team was playing hard and the game looked like it was going to be a close one. 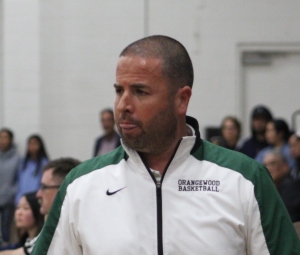 But Orangewood head coach Leslie Aragon made some crucial adjustments at halftime which helped turn the game in favor of the Spartans. “We had to protect the ball a little bit better, but we made an adjustment to take away their high post and they missed some threes, so that helped out,” he said.

But if you live on three’s you have a chance to make a comeback in any game, as the Saxons tried to do. Tokeshi dropped 11 points in the final frame including three three-pointers to trim the lead to single digits at one point.

But the Spartans had too much firepower. Eldoie Lalotte came up huge in the fourth. scoring seven of her 11 points to help seal the victory for the home team.  Next stop, the finals.

“We have been there before, but we haven’t been there in a while. We are blessed to be here,” said Aragon. And blessed they are to be healthy, and after a devastating season last year filled with injuries, the Spartans return to the big stage where they will face a familiar foe in Fairmont Prep (25-6, 7-1).