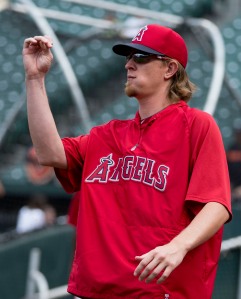 They’re undefeated. The Los Angeles Angels of Anaheim beat the Chicago White Sox 8-1 Sunday to sweep the three-game series at the Big and remain loss-less after the All-Star break. The win improved their record to 40-52 and moved the Halos into a fourth place tie with the Oakland A’s in the American League West.

Jered Weaver picked up his eighth win and Albert Pujols hit two home runs in the victory. Weaver (8-7) threw seven innings of one-run ball, yielding six hits, walking one and striking out one.

“[Jered] was letting it hum a little bit,” Angels manager Mike Scioscia said. “He was going after guys with it, making some pitches with it. When you look at the whole package of what Jered does, when he’s able to get that fastball coming out of his hand well, it’s sneaky. It gets past some guys. Today, he pitched well with everything he had.”

Pujols homered in the second and fourth innings, driving in four runs and increasing his career total of round-trippers to 577. He’s 11th on the all-time list.

The Angels had six runs in the first four innings, shelling Sox starter Jacob Turner (0-1) in posting their seventh win in their last nine games. Yunel Escobar (now hitting .322) had two hits, as did Pujols and Gregorio Petit (.282). Mike Trout (.316) had a double and a walk, scoring twice.

On Monday the Halos have a chance to make up some serious ground the in the AL West race when they start a three-game series in Anaheim hosting the first place Texas Rangers. Nick Tropeano (3-2) will get the start for the home team.