History made with new mayor, council 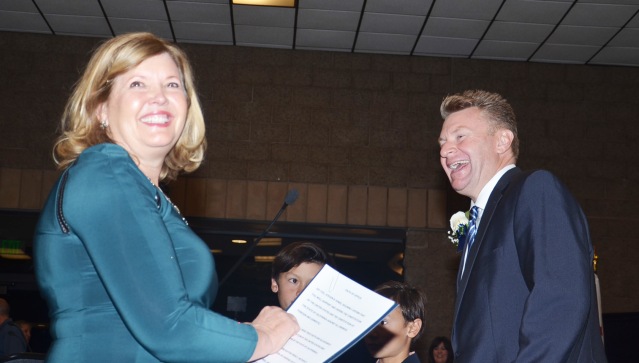 History was made Tuesday night as a new mayor and a new expanded city council for Garden Grove were sworn-in and seated. Before a crowd of several hundred that spilled out into the hallways at the Community Meeting Center, Steve Jones took the gavel as the city’s 15th mayor, presiding over a newly-minted chosen-by-district council of seven.

“As we transition from a five-member to a seven-member city council,” said Jones. “it’s going to be a new Garden Grove, a fresher Garden Grove, a healthier Garden Grove. I could not possibly be more thrilled to be surrounded by these council members. You are in good hands.”

Before the new mayor and council were seated, outgoing Mayor Bao Nguyen and Councilman Chris Phan make their parting remarks.

“I want to express my extreme gratitude to you all,” said Nguyen in a brief 30-second address. Phan praised city employees. “It’s amazing. They make us look good,” he said, and wished good luck to the returning and new council members. “I leave here with sadness, but also a lot of thankfulness for having the opportunity to serve the great city of Garden Grove.”

Chosen to be mayor pro tem was Phat Bui.

The evening included some emotion and some humor. O’Neill took the oath of office and was sworn in by his mother. Kim Nguyen, in her long list of “thank yous,” gave special recognition to her dog, and promised many long walks to make up for the time missed while campaigning.

Some other remarks from new council members included: