Witty and irreverent “Greetings” at WCP 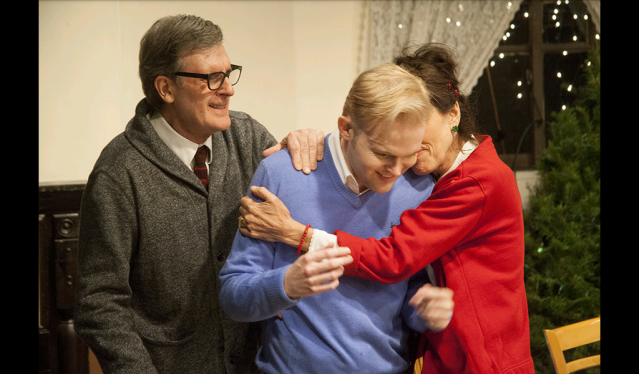 “GREETINGS” on stage at the Westminster Community Playhouse through Sunday (WCP photo).

Christmas miracles come in all forms, and rarely the way you expect.

It’s yuletide in 1990’s Pittsburgh, and Andy Gorski (Eduardo Mora) is coming home for the holidays, with his new fiancee Randi (Priscilla Gonzalez) in tow. He’s looking forward to seeing his sunny and doting mother Emily (Sarah Hoeven), dreading dealing with his curmudgeonly and miserly father Phil (Gary Page)  — but who he’s really looking forward to is his younger brother Mickey (Jason Cook), a developmentally challenged and charming young man, the extent of whose verbiage extends to “Oh boy!” and “Wow!”

His mother seems convinced that she recently heard Mickey say “greetings,” something he’s never done before: and that she’s been seeing some kind of troubling change in him in the last few days, a strange intelligence in his eyes… almost as if someone else was looking through them. Of course, the ever-practical Phil has no time for such talk about his youngest son — he’s too busy berating his eldest about finances, reminiscing about his own youthful days as a ballplayer, and lamenting the lack of neighborhood Christmas spirit (evidenced by an absence of festive lighting.)

But the whole rickety holiday train begins coming off the rails when Andy’s staunch Catholic family learns that his new paramour is not only Jewish, but not particularly religious, either. In the fevered ensuing arguments, as heated tempers and buried resentments clash, the room is suddenly stunned as Mickey exclaims “Greetings!”

It’s there that the real fun starts.

While most people may be accustomed to the usual Christmas fare, director John Francis’ production of “Greetings!” at the Westminster Community Playhouse presents a welcome and novel take on the holiday morality play — a lesson to those who may be stagnating that the only constant is change, and that growth only comes when one is truly ready for it. The banter between the cast is witty and sharp: it feels like one of the best sitcoms you’ve ever seen, and you may even wonder why it hasn’t been adapted as a holiday movie yet.

All the actors are engaging in their roles, and you can feel the genuine familial affection between the characters, despite their differences — but the axis around which both family and play revolve is Mickey, played with gentle strength and subtle depth by Cook. The portrayal of his character’s physical and mental challenges is thoroughly convincing, as well as the fascinating manifestation of his “other” voice.

“It’s been a really interesting process,” says Cook about the challenges in taking on the role of Mickey. “There wasn’t a lot on the page… ‘Mickey enters the room.’ It doesn’t say how he is in the world, how he moves, so we had just a kind of discovery process there. In fact, what you hear him say in the first act is pretty much it.”

Despite its unusual, perhaps even irreverent tone, Cook believes in the material. “It’s a great show,” he continues, “‘A Christmas Carol’ is wonderful, but it’s nice to have a different message out there.”

A funny and fascinating slice of holiday family life, with a twist of spiritual awakening thrown in for good measure, “Greetings!” charms and captures the spirit of the season, in a most unconventional way.