Aztecs celebrate a win over Century 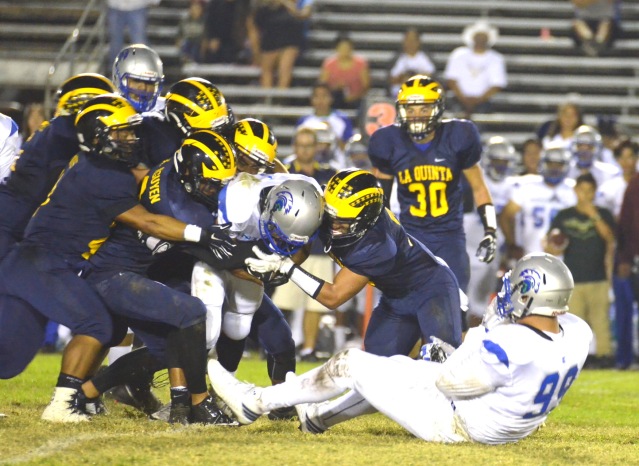 LA QUINTA’S defense (in blue) got a lot of the credit for the Aztecs’ 35-25 win over Century Friday night at Bolsa Grande Stadium (Orange County Tribune photos).

It was a night for celebration as La Quinta High held its annual homecoming event, and the Aztec football team defeated an undefeated Century High squad 35-25 to complete the pre-league season with a 5-0 mark going into next week’s Garden Grove League opener against Garden Grove.

Hey, but don’t pop the champagne or sparkling cider quite yet.

“The bottom line is that the champion is still Garden Grove and you’ve got to beat Garden Grove to be the champion,” said Aztec head coach Andy Diaz after the win at Bolsa Grande Stadium. “We are a very good Division 13 team and they’re Division 8. People don’t realize how tough Garden Grove is.”

La Quinta looked pretty tough, too, forcing turnovers and bouncing back despite some bad breaks. After falling behind 12-0 in the early going due to two scores by Century’s Alexis Rodriguez, the Aztecs rallied with a pair of touchdowns to take a 14-12 halftime lead. Michael Nadeau scored on a 12-yard keeper for the first LQ tally at the 8:03 mark of the second quarter and added another from the 2-yard line at 3:29.

Dylan Do took over the heavy lifting in the second half, scoring on a 31-yard romp, then adding a 3-yard touchdown on the next La Quinta possession for a 28-12 lead with 28 seconds left in the third quarter.

MICHAEL NADEAU (11) pitches the ball to a running back in the Aztecs’ win Friday.

But the Centurions, who came into the game with a 4-0 mark, didn’t give up. Jodeci Pongphimkam’s running set up a drive to the Aztec 25, where Frederick Mendoza scored at the 9:58 mark of the fourth quarter to cut the lead to 28-18. La Quinta answered with a 15-yard touchdown pass from Nadeau to Jayelen Walker at 7:30 for a 35-18 edge.

Century cut the lead to 10 points when the visitors scored on a keeper by Fernando Cambray with 1:09 left in the game to make it 35-25, but an onside kick failed and the Aztecs ran out the clock.

“It was a great job by our defense. It did an incredible job of getting us the ball on turnovers and we were able to capitalize on offense,” said Diaz.

Can a resurgent Aztec program – which was 1-9 just a few years ago – end Garden Grove’s five-year run as GGL champions? We’ll see who is celebrating on Oct. 6. 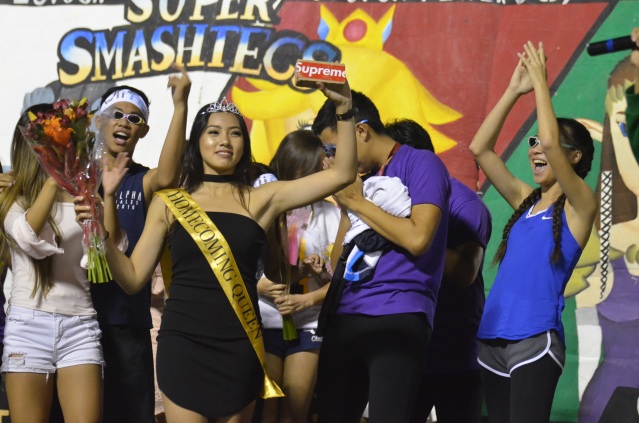 Here are results from Friday night’s prep football games for teams in the Garden Grove-Huntington Beach-Westminster area. All are non-league contests.