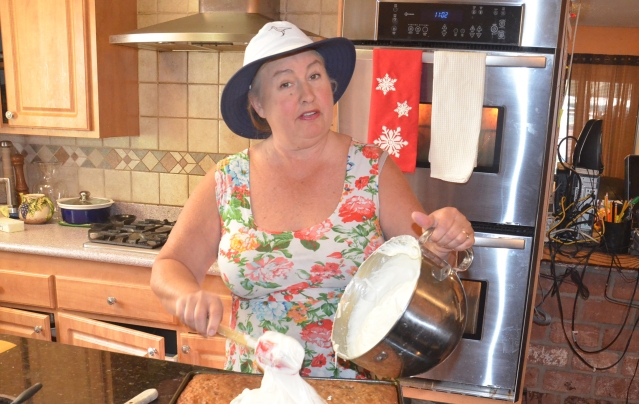 It’s been breezy lately, but if you feel an especially strong whirlwind coming from West Garden Grove and Westminster, it might just be all the activity coming from the home of Karen Hatfield.

On Tuesday she will be delivering between 4,000 and 5,000 cookies and other goodies to the Garden Grove Police Department, the latest in a long series of good works which have made the 55-year-old woman a perfect storm of good will, good neighbor and good cooking.

“She’s genuine, loyal and unflappable,” says Maureen Blackmun, herself a well-known community activist who serves as president of the Garden Grove Neighborhood Association. “Negativity rolls off her back. She sees the good in all. Her energy is infectious. She hides nothing. She is a doer.” 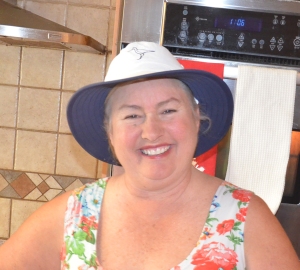 KAREN HATIELD is well-known for “her infectious energy.” And her hat (OC Tribune photo).

A former resident of Westminster, this cheery doer moved with her family to West Garden Grove in 2005. At her church, “I was always involved in our Hearts and Hands program. I headed that up,” she said recently, cooking in her kitchen with her signature golf-baking hat on.

“I just kind of was always raised that way. Somebody passes away or somebody’s sick … you take a meal. That’s what I do.”

The path to becoming one of the area’s premier food philanthropists took her into a partnership with the junior Naval Reserve Officer Training Corps program at Pacifica High School several years ago.

“I was invited to cook at the Enders [Elementary School] carnival,” she said. “I was going to hire someone to work with me but the lady said no, no, I’ll be there. Fifteen minutes before [the event], she backs out. I’m going crazy.”

But a half dozen JNROTC cadets from Pacifica showed up and pitched in to help save the day, and the relationship between the cookie lady and the future sailors was, uh, cooked.

“I just love their program,” said Hatfield, who also goes by Spurgeon-Hatfield. “This group is so self-motivated, they just want things the right way because it’s the right way. They stand for good moral things that our country needs, you know.”

On Saturday and Sunday about 15 of the cadets helped with the cooking and preparation of a plate of sweets for every Garden Grove patrol officer and giant platters for every department within the GGPD as a way of showing support for local law enforcement.

But her activities don’t begin or end with snickerdoodles and chocolate chips. She’s helped the needy with clothes and groceries and recently authored a children’s book, “Morty and the Hungry Lion,” the proceeds from the sale of which will go to benefit the children of Candice Bowers, a Garden Grove resident who was killed at a music concert by a gunman in Las Vegas in October, along with 57 others.

She is a bit of a local legend with her good works, but no good deed goes unpunished. Hatfield went onto social media to say she’d put on a pot of soup and invited people to share it, but someone complained to the Orange County Health Department.
“They said I can’t advertise or give a bowl of soup to strangers, and you can’t advertise it on Facebook,” she said, although the gifts to police were permitted.

Although a resident of Garden Grove since 2005, the flour and yeast of her current efforts can be traced back to when she was just 4 years old, living in a small town in southern Illinois.

“I vividly remember going with my great-grandmother and my great aunt and taking boxes of food to a family,” she said. “It just made a big impact in my life.”

Just as Karen Hatfield is making her own big impact, one good deed and many platters of goodies at a time.