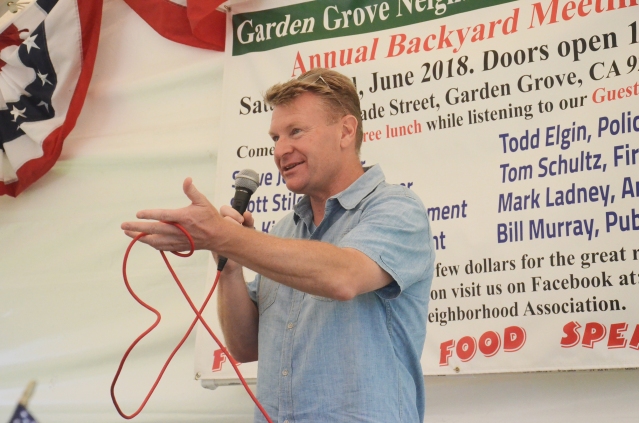 In some places and some times, politics and civics take place mostly in backrooms. In Garden Grove it can sometimes take place in a backyard.

The 15th annual Garden Grove Neighborhood Association meeting was held Saturday at a home on Meade Street in the central part of the town, continuing a tradition of bringing city, school and county leaders into contact with local citizens.

That’s the home of Maureen Blackmun, president of the GGNA. 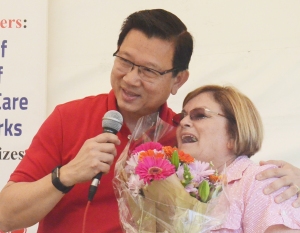 ANDREW DO, Orange County First District Supervisor, gives a hug and flowers to Maureen Blackmun, president of the GGNA.

Under a canopy and flanked by tables laden with informational material, food and cookies, the audience heard remarks from Mayor Steve Jones, City Manager Scott Stiles and Orange County First District Supervisor Andrew Do, among others.

“We’ve been working very proactively on what we call rebranding our city or our ‘Re-Imagine’ campaign,” said Jones. “I’m proud to say it’s working.”

He credited collaboration among city departments with downtown-civic center projects such as the Cottage Industries and SteelCraft developments on the way.

“So, cool things are happening in town. It’s just a matter of time,” said Jones. He added, “To me it’s painfully slow. I can envision where we will be in a few years. It always feels like it takes longer and there’s more steps and hurdles to go over, but things are breaking ground and underway.”

He further pledged to preserve Garden Grove’s “Mayberry-like town” but also make the “city attractive to millennials to come in and take advantage of the value proposition we have relative to the rest of the county.”

Stiles echoed that. “We have a lot of challenges, but we have a lot of good things going on,” said the city manager. He cited a new fire station under construction, improvements in code enforcement and progress in economic development.

Do gave an extensive presentation about the county’s efforts to deal with the homelessness problem and outlined a new effort which he believes will make a major impact on providing services for homeless people and getting them off the street.

Police Chief Todd Elgin and Fire Chief Tom Schultz spoke of how understaffing of those departments affects the ability of the officers and firemen to cope with issues in a growing community, and Chief Building Officer David Dent talked about his plans to re-organize efforts in code enforcement to deal with properties and businesses which don’t meet city standards.

Bob Harden, president of the Garden Grove Unified School District’s Board of Education, spoke of the many awards and honors won by the GGUSD which have given the local school systems statewide and even national recognition. 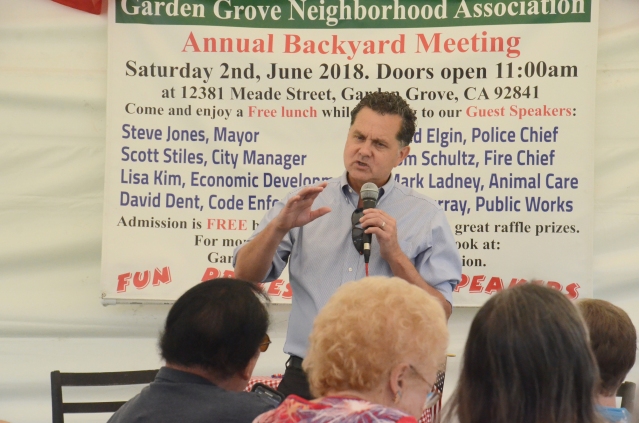