Pete Z: It has to be big, bad Jim Brown 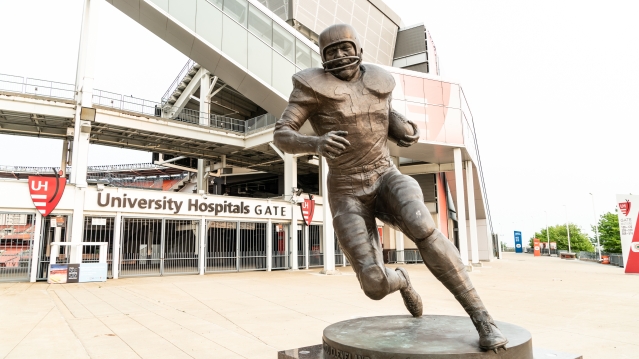 JIM BROWN is larger-than-life outside the Browns’ home in Cleveland (Shutterstock/Sponseller).

A couple of weeks ago we declared old school Bill Russell to be the greatest basketball player ever, elbowing aside – get it? – modern hoop icons Michael Jordan and LeBron James.

(The baseball “contest” was easier; no one ever combined brilliant pitching and hitting like Babe Ruth).

Now, with the Rams and the Chargers looking forward to some form of NFL action this fall, the titanic new question becomes this: who’s the top pro football player of all time?

Let’s start with the short list. You could make a good argument that the best quarterback has to claim that prize, because he is so crucial to a team’s success. That would tend to favor Tom “Buccaneer” Brady, who has six Super Bowl rings.

On the other hand, a quarterback is just one-half of the passing game. There’s no success if the receiver can’t catch the ball and run with it. Jerry Rice is the top man in that regard, a three-time Super Bowl champ and holder of a bowl-full of records including all-purpose touchdowns, receptions, total yards and TD receptions.

There’s also a cliché – not far from the truth, as far as I/we are concerned – that defense wins championships, so it makes sense to look at the resume of linebacker Lawrence Taylor, the nine-time All-Pro pick and winner of a pair of Super Bowl rings. He won NFL Player of the Year honors in 1986, a rare win for the guys on the tackling side of the ball.

(If you’re a long-time hardcore Rams fan you might award that honor instead to Deacon Jones, the defensive end who anchored the “Fearsome Four,” arguably the best defensive front line ever. No Super Bowl rings –much of his career was pre-Super Bowl – but he was five times an All-Pro and a constant creator of havoc with 194.5 sacks. Long-retired QBs still have nightmares about him).

However, one man stands head and shoulders (helmet and shoulder pads) above them all and that’s the greatest running back – and player – of all time: Jim Brown.

Many of today’s fans never heard of him. He played 1957-1965, before both the Super Bowl era and the universal presence of televised games. Furthermore, he retired at the peak of his career, showing great good sense in addition to what the kiddos of today might call “mad skills.” 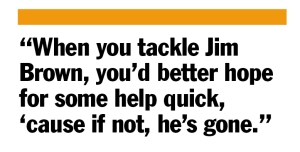 He dominated almost every game he played, combining strength, speed and acumen. Many a defender thought they had him and then he would break the tackle – or often, several tackles. One cornerback said of him “When you tackle Jim Brown, you’d better hope for some help quick, ‘cause if not, he’s gone.”

He was not only difficult to bring down, it could be a painful act. “Make sure when anyone tackles you he remembers how much it hurt,” he once said.

When he retired from his career with the old Cleveland Browns, he held just about every rushing record in pro football. He still holds the mark for average rushing yards per game at 104.3, and is the only player ever to average triple figures over his career.

The list of accomplishments goes on and on. He led the Browns to the 1964 NFL title, was the first player to rush for over 10,000 yards and was also a spokesman for the civil rights movement.

After retiring from football, he moved into a successful acting career.

Brown was not a perfect man. He had several run-ins with the law, including several assault charges. Brown twice served jail sentences.

Great skill is not always accompanied by perfect character. But between the chalk lines, there was never a better player than Jim Brown.