TEST SCORES in math and English and rising and are above the state average in the GGUSD.

Garden Grove Unified School District students demonstrated significant growth and exceeded state averages at all grade levels in both math and English on the state’s Smarter Balanced Summative Assessments (SBAC) test, according to results released by the state

Department of Education this week.  This is the third year of results from the SBAC test that is administered as part of the California Assessment of Student Performance and Progress (CAASPP).

Carol Hansen, superintendent of the Ocean View School District, has been named a “Superintendent to Watch for 2017-18” by the National School Public Relations Association for “dynamic leadership with a strong emphasis on proactive communications.”

She is one of 21 superintendents selected from across the United States and will be honored at the NSPRA convention next July in Anaheim. Hansen has been with the OVSD – a K-8 district serving northern Huntington Beach and portions of other cities – since 2015.

A group of from Cook Elementary School in Garden Grove spearheaded a school-wide initiative to help students in Houston whose school had been devastated by Hurricane Harvey.  Students brought their ideas to Cook Principal Sandi Ishii who made contact with Mitchell Elementary School, a small school in Houston Independent School District that was deemed a complete loss due to flooding. 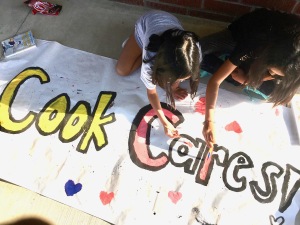 In two weeks, Cook students raised $1,800.  Several students dipped into their piggy banks to help grow the donation. Cook Elementary School’s Student Council helped count and prepare the money for the bank and students in the Boys & Girls Club made signs of encouragement.  Students prepared a care package with letters of support, the $1,800 donation, and a Cook Lion and Mitchell Bulldog to express Cook’s support for the school and its students.

Just before Hurricane Harvey hit, Mitchell Elementary School students had met their teacher and brought their personal school supplies into their classrooms.  After the hurricane, the school was under four feet of water and everything, including students’ school supplies, were lost.  The money raised by Cook students will be used to buy students at Mitchell the supplies they need for school.