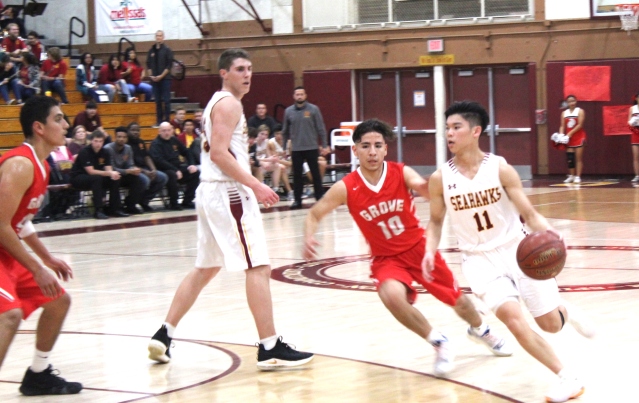 CARSON NGUYEN (11) of Ocean View drives while Kyler Torres (10) of Garden Grove defends. Nguyen scored 19 points as the Seahawks defeated the Argonauts 74-68 in a battle for the Golden West League lead and title (Orange County Tribune photos by Christopher Abdelmalek).

Perfection is a scary word to throw around about a sports team. Undefeated is another. When chasing a league title, the goal is to achieve these two conditions. Those were the expectations of the Seahawks of Ocean View High School (17-8 overall, 7-0 in league) as they faced their top rival the Argonauts of Garden Grove High School (21-3, 6-1) at home for the lead in the Golden West League on Friday night.

The gold and cardinal handed the boys in red and white their only league loss this year at home just two weeks ago. The Argos came in looking for revenge, but the Hawks clinched their claws onto the league lead with a 74-68 victory over the visitors.

Grove’s big three – Sebastian Castro, Jerry Martinez, and Andres Ortega – gave fits for the Seahawks defense all night. Their size and passing abilities kept the ball moving and in motion most of the game. “They are so good; those three guys are a hard cover,” Ocean View Coach Jimmy Harris explained after the game. “Our focus was obviously on the big three. We had some guys helping off their other plays. But they are making smart pass and smart screens.”

However, the Seahawks had a big three of their own tonight in Carson Nguyen, Kurtis Vu, and Vincent Caiazzo. The trio for the Seahawks Friday puts up 60 points combined. Caiazzo went into complete video game mode in the third quarter, hitting four of his game-high seven threes en route to 22 points over all.

Nguyen led the Hawks in free throw attempts tonight getting to line 10 times and converting six tries. He along with Vu finished with 19 points each.

“Giving us a little distance over Garden Grove is gigantic,” Harris said. “Any kind of advantage going into the last two games is awesome.” With a two-game lead in the league, the worst the Seahawks can do is finish with the same record as the Argonauts and a tie for the title.

ALSO on Friday night, Santiago knotted up the Garden Grove League boys’ basketball race with a 65-56 victory over La Quinta. The Cavaliers and the Aztecs are now both 6-2 in league play, with Bolsa Grande and Loara each just a game behind at 5-3.