Before a loud and angry audience, the Westminster City Council at a special meeting Wednesday afternoon voted to issue a press release affirming that there was no intention to change the name of the city, and which accused a city council member of “malicious” motives in connection with a social media post suggesting – presumably sarcastically – that the new name would be “Ho Chi Minh City.”

The vote was 3-1, with Mayor Tri Ta and Councilmembers Kimberly Ho and Chi Charlie Nguyen in favor. Councilman Tai Do – the target of the press release – voted no and Councilman Sergio Contreras was absent. 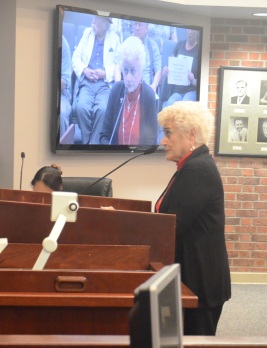 FORMER MAYOR MARGIE RICE spoke to the council on Wednesday.

Do, reacting to an action by the council majority at its June 12 meeting to require that only the mayor or a council majority can place an item on the city council agenda, posted on Facebook that “Westminster is officially now Ho Chi Minh City,” the name given to Saigon when Communists conquered the Republic of (South Vietnam) in 1975.

In a subsequent post, he tied it to members of the council majority.

A special meeting was called for Wednesday at 1 p.m. in the council chamber, which was filled shortly after the call to order. About 30 members of the public addressed the council, most of them in opposition to the sole agenda item, which was “discussion regarding divisive and damaging comments and social media posts made by members of the city council regarding the city.”

Mayor Tri Ta told the audience “the reason why I called this meeting was that over the last seven days, I received a lot of calls regarding a comment and statement from a councilmember saying that Westminster officially was now Ho Chi Minh City. A lot of you called me, asking me ‘Is that officially a statement of the City of Westminster’?”

“Am I trying to censor another councilman? That is not my intention,” he continued. His purpose, he said, was to clarify an issue that had upset many in the Vietnamese community in Westminster.

However, most of members of the public speaking at the meeting took a different viewpoint, accusing Ta and the council majority – which they referred to as “the Gang of Three” – of trying to suppress freedom of speech. At one point, some in the crowd took up the chant “Ho-Chi-Ta,” combining the names of council members to something similar to Ho Chi Minh, the Communist dictator after whom Saigon was named.

Several speakers told the audience that Do’s post was clearly sarcasm and that it was never intended to pretend to be an official announcement. However, one councilman claimed that thousands of posts protesting the purported change were on social media.

One dramatic moment in the public comments came when former Mayor Margie Rice addressed the council. “I have to tell you, Mister Mayor, that I did support you. You were one of the best councilmembers I have been worked with when I was mayor. But you did change. When [former councilmember and current state Assemblyman] Tyler Diep came along, attitudes changed.” She went on. “I expect you to change your vote,” she said. “When I was mayor, I made some mistakes,” she said but admitted her errors publically.

Not all speakers were critical of the mayor and council majority, but as the meeting went on they were repeatedly interrupted by cries of “liar” and “dictator.”

Nguyen proposed a press release disavowing the idea of a name change, and upbraiding Do. A substitute motion by Ho – a resolution of several pages including one section accusing Do of being “reckless” and possibly inciting “confusion and panic” – failed for the lack of a second. Nguyen’s original motion passed 3-1, as some members of the audience applauded and others shouted “Recall! Recall!”