RYAN GETZLAF was honored for his 1000th game as an Anaheim Duck on Sunday. The team lost 3-2 in overtime to Chicago to remain in third place in the NHL Pacific Division (Flickr/Bridget Samuels).

Despite a loss to the Chicago Black Hawks Sunday at Honda Center, the Anaheim Ducks remain very much in the midst of a free-for-all battle in the National Hockey League’s Pacific Division.

The team from the Windy City defeated the Orange County team in Anaheim 3-2 in overtime on a night in which the team honored Ryan Getzlaf for his 1,000th game in a Ducks uniform.

“It was great,” Getzlaf said, on the recognition. “Obviously the crowd, this is our home building and I’ve been here a long time, and it was a very warm welcome. A little emotional during the game and a little bit embarrassing. I’m not very good at those things, but it was great to see the family and having everybody here.” 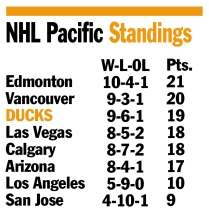 Edmonton’s Oilers lead the chase with 21 points, but the next five teams are within four points, the equivalent of two wins. The Ducks are in third at 9-6-1 (19 points).

Against Chicago on Sunday, the Ducks fell behind 2-0, but goals by Erik Gudbranson and Nick Ritchie tied the game up and sent it into overtime.

Ducks Stat Leaders: Adam Henrique has eight goals; Hampus Lindholm has nine assists; Jakob Silfverberg has 12 points. In goal, John Gibson is 6-6 with a 2.50 goals against average; Ryan Miller is 3-0-1 with a 2.31 GAA.