Rams kicked out of playoff hopes

JARED GOFF threw for two touchdowns and one key interception on Saturday as the Rams lost 34-31 to the 49ers (Rams photo).

Saturday’s do-or-die battle pitting the Los Angeles Rams verses the San Francisco 49ers went back and forth all night, coming down to  33-yard field goal by Robbie Gold as time expired to give the home team a 34-31 win that squashed flat the visitors’ already split playoff hopes.

The 49ers (12-3) got a spectacular late-game performance from quarterback Jimmy Garoppolo, who threw three impressive passes in the teams’ closing drive, including a 46-yard strike to Emmanuel Sanders that set up Gold’s kick. 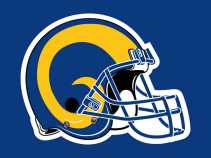 Going into the contest in Santa Clara, the Rams knew they had to win this game (and the next one) and hope that the Minnesota Vikings lost twice, to qualify as an NFC wild card team.

For much of the game, they played well enough to take step one, but stumbled in the late going, including leaving the speedy Sanders nearly wide-open at a crucial moment.

The Rams (now 8-7) sacked Garoppolo six times and intercepted him twice, but he was clutch when he had to be. He went 16-for-27 for 248 yards, compared to the Rams’ Jared Goff, who put the Rams ahead 28-24 in third period with a 22-yard throw to Cooper Kupp. He would finish with 27 completions in 46 attempts for 323 yards, two TDs and one interception.

Todd Gurley gained just 46 yards on the night, but got two short-distance scores for the Rams.

Garoppolo took the Niners ahead 31-28 on a TD throw to George Kittle, but the Rams knotted it up on a 52-yard field goal by Greg Zuerlein.

The Rams, who went to the Super Bowl last year, will conclude their season next week against the Arizona Cardinals.