Playoff dreams are still slipping away

THE ANAHEIM DUCKS are in seventh place in the NHL Pacific Division (Shutterstock).

The chances of the Anaheim Ducks making the Stanley Cup playoffs are getting slimmer and slimmer. After losing two of three games over the past week, the Orange County team ­­– after a brief visit to sixth place – slipped back into seventh in the NHL Pacific Division.

Last Thursday the Anaheimers were spanked by the Calgary Flames 6-0, but bounced back to defeat the Vancouver Canucks 5-1 on Sunday.

Then on Monday, they blew a two-goal lead and yielded five third period goals to lose 6-4 to the Calgary Flames in Alberta.

“We played a decent game,” said Nicholas Deslauriers, who scored his third goal of the season in the third period. “They capitalized on what we gave them. Every little misplay we did, they capitalized. It’s on us. No excuse,” he said. 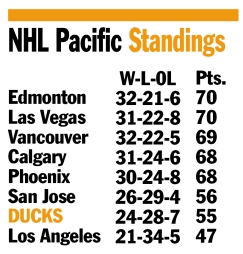 The other goals were scored by Adam Henrique and Jakob Silfverberg.

The Ducks are next in action on Wednesday hosting the Florida Panthers at Honda Center. On Friday the Colorado Avalanche are in town, and then the Las Vegas Golden Knights on Sunday.