A “huzza” for “The British Are Coming” 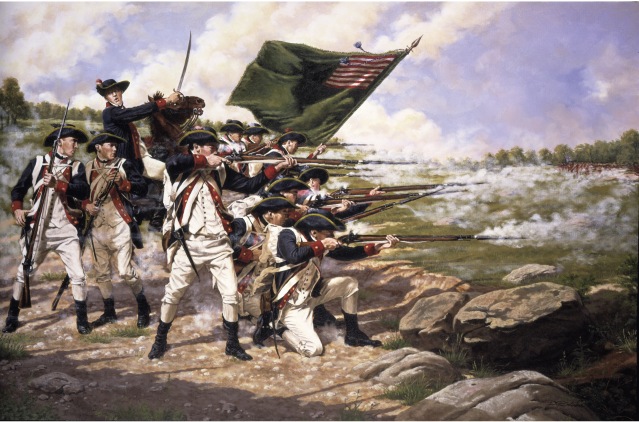 CONTINENTAL ARMY troops from Delaware at the Battle of Long Island in 1776 (Domenick D’Andrea).

The American Revolution was not just the start of a new nation, it was the beginning of a new phase in human civilization in which people began to throw off the shackles of kings, czars, priests and chiefs and to instead govern themselves.

You could fill a Home Depot with all the books, movies, magazines and TV shows made about that epic confrontation between the Old World and the new one, but if you’re looking for a fresh and engaging look at that conflict, you could do much worse than Rick Atkinson’s newest book.

The Pulitzer Prize-winning historian is tackling that pivotal period in world history with a trilogy on the revolution. The first book, “The British Are Coming: The War for America, Lexington to Princeton, 1775-1777” is out and it’s mammoth both in size and detail.

For 800 pages, Atkinson takes us through the first tentative steps toward military resistance to Great Britain from the first skirmish on the Village Green at Lexington to George Washington’s twin masterpieces at Trenton and Princeton.

As always, Atkinson is the monarch of detail. He is meticulous in his research, sometimes, excessively so. Do we really need to know what color buttons are worn on every British regiment’s red coats?

However, if you can forgive that, there’s an engrossing tale to be told here. Heroes rise and fall; battles turn as much on weather and mistakes as they do on brilliant generalship and epic valor.

Washington, as is appropriate, is at the center of much of this. We see him grow from an underqualified and undersupported jumped-up colonel of colonial militia to the linchpin of an increasingly potent national army.

In addition to sweeping views of the political, economic and social issues of the war, we get to travel wearily in knee-deep mud with soldiers from Charles Town (Boston) to Charlestown (South Carolina) enduring great hardship and risk to establish or extinguish the very first “government of the people” in over two centuries.

This “Liberation Trilogy” has two more volumes, and judging by the first, it deserves to march to the front of the column of great works about the great work of the Founding Fighting Father.

“The British Are Coming: The War for America, Lexington to Princeton, 1775-1777” is available as a hardcover book, an audio book and Kindle e-book.