“Lend Me a Tenor” is love and laughs 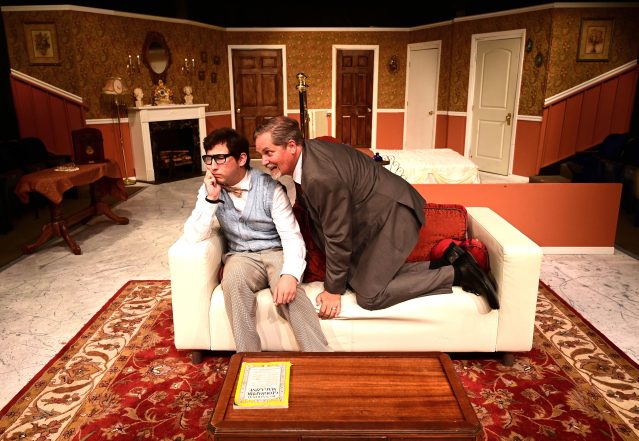 Maria Callas, an American-born Greek soprano, once said, “An opera begins long before the curtain goes up and ends long after it has come down … It starts in my imagination, it becomes my life, and it stays part of my life long after I’ve left the opera house.”

Similarly, the rollicking Priscilla Gonzalez-directed “Lend Me A Tenor,” now playing at the Westminster Community Playhouse, is guaranteed to stick with its viewers for an equally long time to come.

It’s 1934, and the opening night at the Cleveland Grand Opera House – but theater manager Henry Saunders (Greg Stokes), is tied up in knots: panicking over where his headlining star, the bombastic and lauded Italian opera singer Tito Merelli (Eric Schiffer), is. Meanwhile, Henry’s erstwhile and nebbish assistant Max (Mohammad Saman) has troubles of his own, as he madly struggles to locate the opera star, all the while contending with the fickle affections of his on/off girlfriend Maggie (Victoria Zofrea),who also happens to be the hot-tempered Henry’s daughter … and is herself all-too-eagerly awaiting the star’s arrival.

After much fretting and hand-wringing by Henry and Max, Tito finally arrives with his wife, the fiery Maria (Maria O’Connor) in tow, who’s already heated from witnessing the most recent of her husband’s flirtations with other women right before her eyes. But while she is rapidly reaching the end of her rope with Tito, he finds a kindred spirit in Max as they bond over the love of opera – even encouraging the young man to defy his own fears and strike out on stage himself.

But everyone seems to want something from Tito: his wife, fidelity; Henry, his reliability; Max, his inspiration and genius; Maggie, his romance and charm. Even Diana (Ashley Rowlett), the breathtaking statuesque blonde diva of the opera house, hopes getting a bit … er, friendly … with Tito might open more doors for her career.

With so much pressure on him, it would be understandable if a normal man would fold under the stress – but the star manages, through self-medication and the support of his wife. But what if she were no longer there for him, having reached her final straw, what would become of Tito? And if such a giant of the stage were to fall, could anyone, anyone at all, possibly fill those over-sized Pagliacci shoes?

“Lend Me A Tenor” is a fast-paced, stunningly well-timed example of a work of fiction that the audience gets completely drawn into, whether you’re a fan of opera or not. The interplay between the actors and the characters is a constant back-and-forth flow of comedy, with a bit of slapstick thrown in, for good measure. The costumes are lavish, fetching and often seductive; the set is beautifully designed to allow the audience to see what parallel mischief is transpiring in the two adjacent rooms.

With many live theater productions, the intermission is a time to relax, take a breath – grab a coffee or snack, and mull over the play’s events…even perhaps theorizing where the story will lead. But with this production, the audience is more likely to find themselves impatient to return to the darkened atmosphere of the theater, eagerly anticipating the next movement in this comedic symphony.

Most often, one can pinpoint the particularly scene-stealing actors in a production: some might point out the incomparable (wink wink, nudge nudge) Jorge Del Toro as the opera-loving Tito Merelli superfan, angling to get that autograph, regardless how he and the tense Henry grate on each other; or the enchanting Laurie Robbins as Julia, the larger-than-life chairwoman of the opera, sauntering around with a mischievous gleam in her eye as she flirts with the star.

But every single actor shines in this production.

Greg Stokes’ Henry is manic, charming, devious and crafty; Victoria Zofrea’s Maggie is by turns sweet, innocent, enamored and seductive; Eric Schiffer’s Tito is a very sympathetic character, despite his womanizing ways, as we see his kindness towards Max; Maria O’Connor’s engaging Maria is more than just the stereotype of the jealous and possessive wife — she’s genuinely torn between her love of her talented husband, and her fury at his dalliances; and Ashley Rowlett’s Diana … well, defies a thorough enough description.

“Captivating blonde bombshell” is too limiting and cliched: she’s more than just a hungry, seductive starlet looking to get a step up; she’s a more well-rounded and fully realized character, with no illusions about her choices – and she owns them.

But it is particularly the comedic timing and talent of Mohammad Saman as Max that brings the whole piece together.

From his opening pratfall into a table, to his neurotic stuttering and stumbling over his eager words to Maggie, to his camaraderie with Tito – even with the bellhop – to the moments when the audience is privy to his singing talents (the ones Maggie doubts he has)… this young man is truly the heart and soul of the production, reflected back by the myriad talents of the entire cast.

Arguably one of the very best comedies of this theater season, “Lend Me A Tenor” at the Westminster Community Playhouse is a joyride for theatergoers, and a treat for all ages: and even if you’re not an opera fan, this is one show that will make your heart soar.