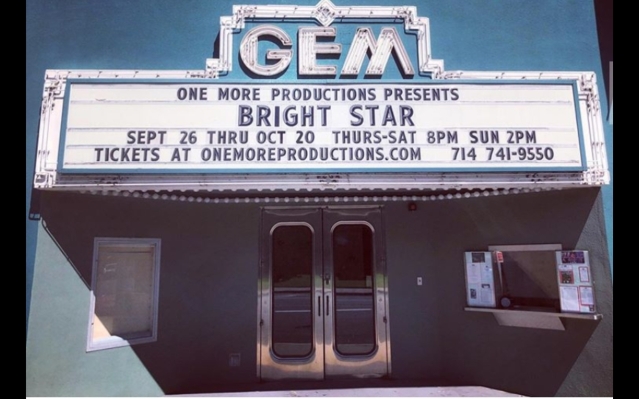 “BRIGHT STAR” opens this week at the Gem Theater in Garden Grove. It was co-written by Steve Martin, a Garden Grove native.

At the 2016 Tony Awards, comedy legend Steve Martin said “I’ve learned a lot: that if you wanna be on Broadway, you have to work hard: you have to study for years, and find the perfect story to tell.

The Broadway musical “Bright Star,” written by Martin and songstress Edie Brickell, opens this week at the Gem Theater in Garden Grove – courtesy of its award-winning in-house production company, One More Productions.

“Bright Star” is a tale loosely based on true events – the story of editor Alice Murphy, so often the curator of so many other people’s narratives, as she instead shares her own: jumping between her present in the Blue Ridge Mountains in the mid-1940s, and the events of her youth in 1923. It’s a saga of love, loss and hope, told through the singular cultural music of that era.

“It’s a beautiful show” says director and One More Productions co-founder Damien Lorton, “it’s all bluegrass music, we have banjo players, fiddle players, mandolin players … Nicole Cassesso, who was the star of ‘Always Patsy Cline” – she’s played in previous country musicals — she’s going to be phenomenal. It was written by Steve Martin, our own local boy … all the music was written by him.

Martin grew up in Garden Grove, attended Rancho Alamitos and Garden Grove high schools and was graduated from GGHS in 1963.

“We’re just so excited to bring this show to life, especially on our stage…It’s such a touching story that just needs to be seen, it’s such a beautiful Americana deal, it’s joyful and sad all at the same time… it’ll something that will really touch your heart.”

“Bright Star” looks to be a special experience to be shared with all ages, the whole family: and a flashback into a moving, entertaining, and uniquely American genre of music.