Retorts: Business of making stuff up

ALEX JONES‘ “Infowars” operation attracts as many as 10 million viewers a month.

It’s been attributed to Julius Caesar the phrase that “people believe whatever they want to believe.” Too bad Julie didn’t believe in making a better choice of friends, perforated as he was in the Roman Senate by his pals on March 15, 44 B.C.

But I do think that the first Caesar – or whoever said it first – was on to something, because some folks believe some crazy stuff.

It’s always been that way, but social media and the Internet have given wings to some theories, concepts and “facts” that make you wonder whether somebody somewhere put something in the water, which is a fun conspiracy theory on its own.

I grew up in a world of batty ideas. My parents urged us kids to put plenty of salt on our food, since salt was healthy and pepper was not. 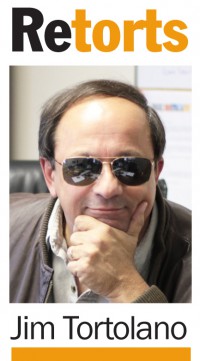 It was almost suicidal to go into the water less than an hour after eating and if you made a contorted facial expression, it might be frozen that way.

Potato salad was deadly and dogs and cats were natural enemies. Don’t wash your hair when you have a cold; you’ll get really sick.

In later life – high school and even college – the folklore became even racier and dumber. For example, if a guy induced a lady into a car and got her shoes off, that was statutory rape.  Males became homosexual if they had an absent father and a domineering mother.

As laughable as all that is, it was sort of harmless. But now that same sort of credulity carries over into politics and public policy. Some folks are actually making voting decisions based on provably false theories and “facts.”

That sort of thing has been around for a long time. President John Adams was accused of being a hermaphrodite.  Abraham Lincoln was said to be part black (a pretty strong insult back in 1860 when 98 percent of the voting population were white men).

The coronavirus pandemic has proven to be fertile ground for all kinds of applesauce. Among the “facts” being promoted are these:

Where do such obviously nutty ideas come from? Some are doubtless the creations of fevered imaginations; some start out as jokes. Others are business propositions.

Perhaps the nation’s most … uh … interesting example of the latter is Alex Jones, proprietor of Infowars.com, which trades in conspiracy theories and fake news. He has claimed that:

I could go on, but that’s not my whole point. Believe me, certain Democrats and liberals can hold on to some pretty screwy ideas.

Apparently, Lyndon Johnson had John Kennedy killed on behalf of Texas oil barons. Or the Mafia. Or the Cubans. Or the Russians.

But why would someone concoct such “facts” as Jones amplifies? And why would anyone believe or act on them?

Well, first off, he makes a lot of money off his enterprises. On his broadcasts – which are said to reach as many as 10 million people – he sells a lot of products including dietary supplements, bulletproof vests and a toothpaste that treats COVID-19.  I wish it could.

But what Jones and other conspiracy specialists are really selling is more than just a placebo. It’s the sense that you have inside information, that you’re smarter than the so-called experts, that you’re part of a wise but underappreciated elite.

Experts sometimes can be wrong. But it’s a pretty good bet they don’t try to confront a deadly disease with a tube of Crest.

Jim Tortolano’s Retorts appears on Wednesdays. And yes, that’s his old pic before he buzzed his head. He’s growing it out, OK?