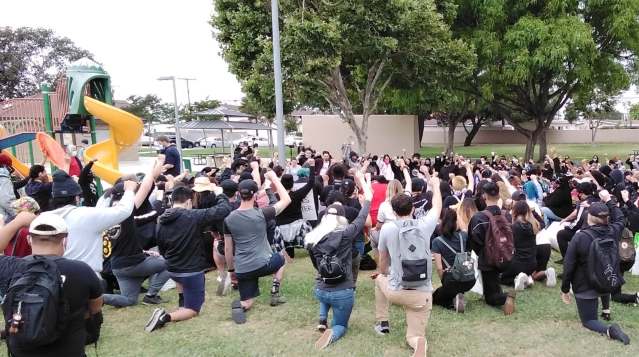 PROTESTERS kneel at a rally Friday afternoon at Liberty Park in Westminster, demonstrating against police brutality (Photos by Jerry Howard/Special to the OC Tribune).

A peaceful crowd of about 200 people brought anger over the George Floyd incident to Westminster on Friday afternoon.

The crowd gathered in Liberty Park, a block north of the Civic Center for the main rally, then walked to the parking lot in front of the City Hall building. Standing on the steps there was a unit of a dozen police officers dressed in riot control gear.

There was a heavy law enforcement presence at the event, with personnel from not only the Westminster Police Department, but also from Garden Grove, Fountain Valley and Orange County sheriff’s deputies.

Floyd is the black man who died on May 25 in Minneapolis after a white police officer knelt on his neck during an arrest. The uproar from that has caused protests both non-violent and violent across the country.

There were no incidents of violence. A highlight of the rally at Liberty Park was a nine-minute period of kneeling silence in observance of the time that a police office knelt on Floyd’s neck. While almost all wore masks, social distancing was not widely practiced.

Another protest is planned in Westminster on Sunday at Westminster Park at Magnolia Street and Hazard Avenue at 4 p.m. 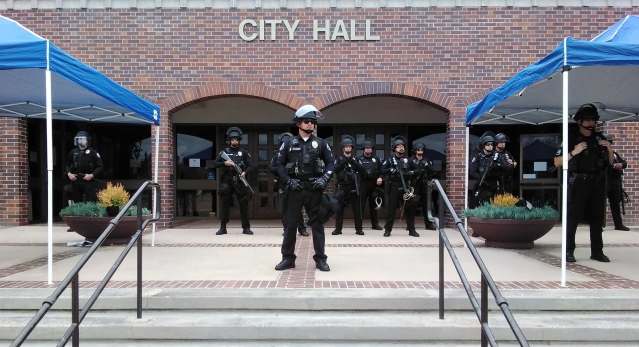